Advertisement
It's a partnership made in heaven. CND has joined forces with Swarovski Crystals to add extra sparkle to its 40th anniversary celebrations.

The nail company has chosen Swarovski as its exclusive nail embellishment for all its ‘ruby’ anniversary events including Premiere Orlando beauty trade show in Florida and the CND ‘Tiny Canvases – The Art of Nails’ exhibit at the Oceanside Museum of Art in Oceanside, California (the birthplace of CND).

The company is also celebrating its anniversary with all its salon partners and clients with the launch of a limited edition version of its popular Shellac Ruby Ritz nail polish featuring Swarovski crystals.

CND co-founder and style director Jan Arnold says the company’s goal has always been to not only stay on top of the trends but to also showcase and elevate the art of nail design.

“As we celebrate our 40th anniversary, the passion and drive to take the industry to the next level is still just as strong as it was in the early days,” she says. 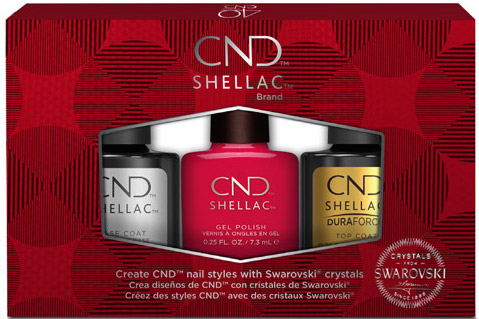 “Working with Swarovski is a match made in heaven, and the next step towards continuing to build upon our great legacy as these are the only crystals our nail pros trust to elevate their creations to unimaginable heights.

“There’s a lot to look forward to, and CND has no plans of slowing down.”

Pacific Nail & Beauty (the master distributor of CND in Australia) will be celebrating the anniversary locally with the launch of the Limited Edition Ruby Ritz in Shellac as well as a 40th Anniversary Pre-Pack containing “Shellac Wildfire, Base Coat and Duraforce Top Coat plus a Swarovski Ruby faceted flat-back sachet”.

According to Pacific Nail & Beauty public relations coordinator Danelle Barr, the company has had many highlights in the years it has distributed CND products around Australia.

“We said ‘hello’ to the ground-breaking innovation CND SHELLAC (a 14-day gel polish system) in May 2010 and then in March 2013 we were once again blown away by the introduction of CND VINYLUX weekly polish, a system that offers durable, high-shine and week-long wear with a two part system that dries in just eight minutes.”